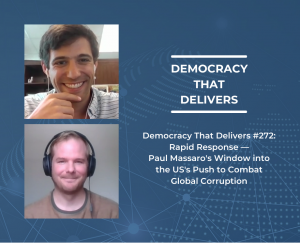 Paul Massaro, who serves as a senior policy advisor for the US Helsinki Commission, sat down with Peter Glover of CIPE’s Anti-Corruption & Governance Center in July 2021 to share an insider’s view of the US government’s efforts to combat global corruption. Massaro is a behind-the-scenes driver of a new wave of thinking about the connection between global corruption and US national security. As part of a new mini-series focused on anti-corruption rapid response, he discusses the new surge of US government actions combating global corruption and the increased attention on rapid response anti-corruption approaches.

The conversation touches on how global corruption can affect everyday Americans — the topic of a couple of recent articles co-authored by Paul — windows of opportunity for anti-corruption reform, the importance of thinking and working politically, the concept of the role of critical junctures in institutional change, and the proposed CROOK Act. Paul is lively both as a podcast guest and on Twitter. Please check out highlights from the interview below and listen to the full episode here.

Peter Glover: Hi Paul, can you tell us a little bit about your path to becoming such a prominent figure in the anti-corruption world? And give us some insight into your secret sauce.

Paul Massaro: You’re too kind, Peter, I think it’s just a matter of getting out there taking action. It’s about trying new projects [and] being vocal about this issue. I think that there tends to be a little bit of hesitancy to be out in the arena in this space. We are a technical bunch. We are thinkers. We are scholars. We are people that want to try to build rule of law in these areas.

Peter: To me, it seems like it’s a bit of a roll up your sleeves, get messy situation. A bit of a Ms. Frizzle and magic school bus approach.

Paul Massaro: That’s a good way to describe it. I think that we desperately need a little bit more dive-in-the-deep-end style thinking. We get caught in analysis paralysis very easily. And if you produce the perfect report, a lot of the time in the current media environment, the current corruption environment, people will applaud you for one day and then move on.

[So] it’s really important that you constantly be taking action [and] staying at the top of the agenda. And…anybody has a hard time doing that, but especially when you’re talking about anonymous shell companies and perpetual trusts and beneficial ownership and transparency. All this stuff that makes people’s eyes glaze over.

So we’ve got to find a way to talk about this where people really understand. About the kind of existential threat we’re facing here and the incredible amount of victims. We both know that hundreds and hundreds of millions of people around the world are robbed blind, whose lives are destroyed by corruption. And we really need to speak about it in those terms, more often urgent terms.

Peter Glover: Let’s go from the perspective of a US citizen outside of Washington DC. How should they be viewing some of the new anti-corruption actions taken by the US government?

Paul Massaro: Global corruption is everywhere and it’s affecting everyone’s lives in ways that I think that they intuitively understand, but have a tough time [fully] fathoming. When you and I talk with your average American and they say, “Oh, DC is corrupt” – and by the way, the congressional approval ratings and other approval ratings for Washington are at all time lows – we shouldn’t look at them and shake our heads and say, Oh, these Americans are uneducated. Their instinctual understanding is that their leaders aren’t representing them. That’s a reflection of this global corrupt framework.

I usually think about this and kind of like a three pillar structure. The first thing we have to do is clean up our act at home. We need to fix our financial and legal framework. The second thing is actually targeting the kleptocrats, disabling them, and hitting them with indictments and sanctions and visa bans. And the third thing is building the rule of law abroad and attacking corruption at the source and helping these reformers to get the right system [in place].

And the key thing about [these three pillars] is that they’re not done in sequential order. You need to do them all at the same time. And if you don’t do them all at the same time, you’re going to fail. None of them can succeed without one of the others. So it needs to be all three 33%, 33%, 33%. Build the rule of law abroad while you’re denying the oligarch money while you’re disabling the oligarchs.

Paul Massaro: Yes, I can’t tell you how important it is to be fast on your feet [with] rapid response. Time-sensitive policy windows open, and you have to take them before they go away. This is one thing that we’ve fundamentally failed in our aid. We’ve taken this overly technical approach at the beginning, mostly driven by being afraid to talk about corruption.

We [often] don’t want to get too political. We don’t want to interfere. And well, you’re either doing [anti-corruption] or you’re not. If we’re building the rule of law abroad, the only way to do it effectively is to be thinking politically. We’ve seen with a lot of these countries, if you go in and you build the most beautiful procedure, the most beautiful codes, and if you didn’t do the politics, they ended up just perverting this stuff and using it for their own perverse purposes.

And it actually makes kleptocracy more effective because then it gives it the veneer of legitimacy. Or [you have to] pursue them through the courts like the Russians do in the US and are doing in London with lawfare and stuff like that. Then in our courts we gave them the whole legal code that recognizes what they signed. It’s all a huge mess and it’s all been driven by this multi-year, technical, overly bureaucratic approach that is not taking into consideration the fundamentally political aspects of corruption.