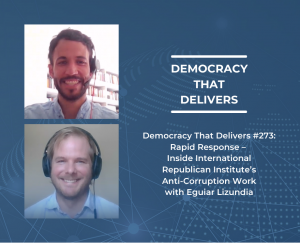 Eguiar Lizundia, Deputy Director for the Center for Global Impact at the International Republican Institute (IRI), sat down with Peter Glover of CIPE’s Anti-Corruption & Governance Center in August 2021 for the latest edition of a rapid response anti-corruption mini-series. The two discussed Linzundia’s work deploying anti-corruption measures in political windows of opportunity, guided by IRI’s impressive new publication, the “Anti-Corruption Toolkit for Civic Activists.”

In his role at IRI, Lizundia builds thought leadership on key issues, facilitates cross-program learning, and leads efforts to improve programming. He’s recently written articles outlining how to improve US efforts to combat corruption in Central America, why the US should bring local governments into the Summit for Democracy, and why it is important to look beyond the West to combat kleptocracy. Find highlights from the interview below and listen to the full episode here.

Eguiar Lizundia: My recommendation is always to make sure that you are working with people on the ground. We–CIPE, IRI–are lucky to have local offices in many of the countries where we operate, and that is a great asset that we have as institutes and as part of the [anti-corruption] family.

We can tap into our colleagues, fellow anti-corruption specialists very close to that reality and who have regular interaction with civil servants, government officials, and the local news. They are able to identify genuine anti-corruption champions who are reforming for the right reasons. At IRI, we’ve been able to do work at the municipal level precisely because we receive that critical information and those key insights from our colleagues. And then based on that information, we can conduct more targeted assessments that are able to identify the political will of windows of opportunity.

Peter Glover: Can you give specific examples of IRI rapidly responding to a window of opportunity for anti-corruption reform? And can you talk about how this program might differ from bread-and-butter anti-corruption programs?

Eguiar Lizundia: Absolutely. Perhaps our most recent example is Follow the COVID Money in the Gambia. For IRI, this was very new in the sense that we have never operated in a pandemic scenario, so we had to pivot quickly and shift our focus from long-term fiscal transparency reforms to analyzing how funds mobilized to respond to the crisis were being utilized.

When COVID-19 hit, the Gambian government––just like governments all over the world––responded with funds and programs to help alleviate the burden on citizens. Immediately, thanks to funding from the U.S. Embassy in Banjul, we collaborated with a partner that we had been working with for a long time, Gambia Participates, to look at how this money was being spent.

Eventually Gambia Participates produced a report that highlighted the government’s mismanagement of the crisis from a financial operational standpoint. One of the key things that the report ended up revealing was how millions of dollars had been spent on things like motor vehicles and hotel accommodations, while clinics and treatment and isolation centers were not in adequate conditions.

What was surprising, though, is that the report and these findings produced a response from the government as they committed to look into the matter further. So we proceeded to dive deeper into tracking the funds specific to COVID programs and then worked to popularize and share the information publicly in the Gambia using both English and local languages on social and traditional media platforms.

We have a teammate on the ground right now working on this. They regularly collect data, including the delivery of food packages, which is very important for the Gambia as the pandemic has threatened a lot of people’s livelihoods, and see whether those are getting to the right beneficiaries. The project is still ongoing, but in the next few months we should have interesting data that complements that initial report that our partners produced.

One of the challenges of this exercise was obviously accessing the information about the COVID-19 emergency funds. And the perhaps ironic thing is that it was harder to get data on the funds that our multilateral organizations had pledged and provided the Gambian government than it was to look at the domestic resources that were being mobilized.

Peter Glover: I was wondering if there are any other examples that you would like to highlight from IRI’s Rapid Response programs in other countries.

Eguiar Lizundia: Two countries come to mind: North Macedonia and Mexico. I mentioned earlier how a change in government creates a window of opportunity, which was the case for the work we have been doing on the anti-corruption front in North Macedonia. In 2017, after 11 years of the rule of the previous party, a new government was formed and IRI supported two key initiatives: an open finance portal as well as our vision of the anti-corruption law.

The portal was something that had been proposed in the electoral platform of the Social Democrats––the party in power––and in 2018, they came to us asking for international support in its implementation.

IRI helped connect them with software developers to make sure that the portal was not only technically sound but also most critically included the views of citizens, journalists, and users. We didn’t want to support the development of something that would just be a box-ticking exercise, but rather a user-friendly and meaningful tool.

The mechanics were a bit different for the anti-corruption law. We recommended this based on our assessment of the existing legislation work for the last few years on the ground.

I mentioned earlier how important it is to have local expertise that can identify the needs of a country, and that’s what we did in this case. We presented the idea to the prime minister and he instructed his party to start the process of amending the existing law, which we again supported by mobilizing experts on different aspects of the law and best practices.

One key reform the law introduced was a public, transparent, and merit-based process for selecting members of the North Macedonia Anti-Corruption Commission. This was critical because it was the first time that that type of open selection process had been implemented in any of the 173 public bodies in the country.

Second, the new law strengthened the powers of the commission and its position in the chain of institutions responsible for combating corruption. It also gave them the tools to enact anti-corruption measures with teeth.

Shifting to Mexico, the window of opportunity didn’t have to do with a change in government or an event. What occurred was the passing of a landmark piece of legislation, the National Anti-Corruption System at the federal level, which for the first time created a series of institutions and frameworks that were aimed at stamping out corruption by taking a multi-sectoral approach and mandating states to develop their own anti-corruption mechanisms. So that’s exactly what we did. We partnered with three Mexican states and helped form and sustain anti-corruption coalitions that included stakeholders encompassing not only folks from government and the media, but also the private sector and academia.

We are quite satisfied with the results because these states’ systems include very innovative components. They’re also much more open to addressing the local needs of the states. So by supporting a locally driven effort, we were able to help shape anti-corruption efforts that were responsive to the needs on the ground.