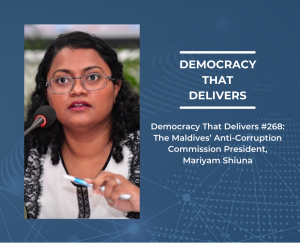 Mariyam Shiuna, current President of the Maldives’ Anti-Corruption Commission (ACC) and former Director of Transparency Malaysia, recently joined our podcast to share about her uncommon transition from anti-corruption advocacy to leading anti-corruption governance at the ACC. Listen to hear Mariyam tell the story of her transition to the ACC, highlight the corruption landscape in the Maldives, and describe the agency’s reform agenda. She is joined by CIPE’s Anti-Corruption and Governance Center Director Frank Brown and CIPE Asia Program Officer Gibson Haynes.

Highlights from the interview are included below and the full episode is available here.

Mariyam: I wouldn’t say that it plays a more significant role in global corruption in comparison to countries of a similar size. But over the past six years, it has received a lot of global attention for being a haven for the rich to launder money or buy beautiful islands through corrupt deals, as revealed through the Al Jazeera documentary called Stealing Paradise, or the recent OCCRP investigation on the leasing of islands, which showed how politicians at the top level abuse their authority to embezzle millions of dollars by leasing islands through a state company.

And in fact, [a] case known as the MMPRC corruption scandal, which we are currently still investigating…is the largest corruption scandal recorded in Maldivian history. And we’re talking about over 50 islands and lagoons given away through fraudulent deals, with over $200 million missing from state coffers. Our islands are being sold off through corrupt deals, through cheap deals for the rich as quick get rich schemes. So…we’re getting a lot of attention for these schemes. It’s very concerning, but I think with the change in administration since 2018 and with the unraveling of this corruption scandal, we are identifying the loopholes within the system, where we have failed within the system and a lot of work has currently been taking place, and in my opinion, where genuine political will exists, so I’m…optimistic that we can still change.

Gibson: How have you found that transition and how have you been able to pursue anti-corruption and corrupt actors within the country?

Mariyam: It has been really interesting so far, but very, very challenging. What I have realized fighting corruption from this end is that it’s even…harder because there are many forces against you. I mean, it’s very easy to advocate from the outside, but to actually challenge the system, once you’re inside, it’s much, much harder.
Interestingly, one of the criticisms I get from well-meaning people is “Stop acting like an NGO.” And I keep asking these people, “What do you mean?” What I found out is that they keep telling me to stop being principled. They ask me to put aside principles and to use alternative methods within the system to make some of the decisions I make. And I am someone who [does] come up with alternative conversations. [So] I tend to have uncomfortable conversations. And because of that, I’m not very popular, to be honest. In the course of 1.5 years that I’ve been in this position, there have been two attempts to take a no-confidence vote against me, but I guess that’s part of the role, as part of the job. I take it as I must be doing something right.

Frank: For a country of a little over a half a million people, you have a staff of a hundred and you have a budget of about $2 million. You’re describing mechanisms that a lot of countries don’t have, [like] illicit enrichment, asset declarations… Where does the business community stand in all this? And would you characterize their position generally as a positive or a negative?

Mariyam: Firstly, if you look at the MMPRC corruption case, it’s a very good example where we see [that] the private sector or the business community turned a blind eye or ignored red flags when it comes to getting a cheap deal for an island. Politics is very volatile in the Maldives. You always see Maldivian politicians, once they get into the opposition, always [say] that once they get back into power they will overturn a particular law, or they will overturn a particular business deal. They always continue to threaten each other like that… which makes business really volatile here or investments really volatile.

So I would say for private or foreign businesses that invest in the Maldives, it’s important to not ignore red flags. And that’s what has happened with the MMPRC corruption scandal as well. Those red flags were there, and for businesses that invested in those islands through the MMPRC corruption scandal, [there] was lack of regard for business ethics or corporate responsibility. So I think [the] cost of business would be expensive…if you continue to ignore those responsibilities, or if you continue to do business here ignoring the rights of citizens or ignoring the environment in exchange [for] building resorts or getting…cheap island deals.

Frank: So because the Maldives relies so much on international tourism, some say it’s a special case when it comes to motivating business to change its behavior and to try to reduce business’s contribution to the corruption environment. Is that true? Is the Maldives a special case in that regard? And if so, what is your role in [encouraging] business to change its behavior?

Mariyam: Most people that try to do business here [do it] through personal connections. What has happened with that scandal has just…revealed the way islands have been given away [by developers] in the country. It has revealed what was sort of a public secret. How islands were given away for resort development or how the bidding process took place. It just revealed itself through that scandal. Businesses [have] used connections through politicians to get cheap deals, to get these islands. That was how things were done in the Maldives. And for me, I think it [hurts] competition when it comes to doing business and it increases costs in doing business in the Maldives and it [hurts] public trust in the system.

But I also think that the private sector and companies [need to do more] to adhere to business ethics and corporate standards.