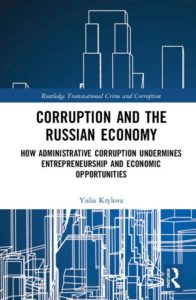 The issues Krylova describes are not new or unique to Russia. Krylova’s research supports existing literature about the relationships between corruption and entrepreneurship, regulatory agencies, gender, and Russia’s recent past. She also builds on research that focuses not on bribe-takers but rather bribe-payers, who are not culturally predisposed to want to pay bribes to get ahead, but rather must pay bribes to ensure their basic property rights. Krylova’s scholarly contribution is an overview of Russian entrepreneurs’ corruption problems.

Two chapters are devoted to how public officials grab assets from business people. On the national level, Krylova’s insight is to distinguish earlier “state capture” from “market capture” today. State capture is a system in which the wealthy control those in power. Market capture works in reverse: power controls wealth. Those close to centralized powers own an increasing percentage of GDP. This leaves little room in the market for independent enterprises. On the local level, micro, small, and medium-sized businesses continue to suffer as they did in the 1990s from raiding, the illegal seizure of private businesses by or in collaboration with public officials. The raids are often officially justified by rigged-to-fail inspections by regulatory agencies in cahoots with the raiders.

Krylova uses these findings to suggest solutions. First, fighting corruption is most effective through collective action because business owners collectively oppose a corrupt system but to remain afloat individually must participate in corruption. Second, collective action initiatives involving female entrepreneurs and business associations may be particularly effective in reducing corruption, since these groups already pay fewer bribes. To demonstrate the effectiveness of this approach, Krylova cites CIPE’s programs with a women’s business association coalition in the Balkans and Saratov Chamber of Commerce in Russia. However, business associations are not a silver bullet. Krylova also cites research showing that many business associations in Russia in particular are ill prepared to improve market conditions because of their loyalty to the government or vested interest advocacy.

In her introduction, Krylova notes that Russia’s number of entrepreneurs has been declining significantly since 2008, and most dramatically fell by half in 2015. She provides evidence that this was due to internal problems, specifically corruption, rather than sanctions or other political and economic factors. However, she doesn’t fully explain why or how market capture, raiding, “regulocracy,” or facilitation payments got so much worse in recent years, and in 2015 in particular, to cause this drop. In fact, Krylova provides significant evidence to the contrary by citing earlier literature confirming that these problems have existed in Russia for many years. These issues clearly affect entrepreneurs, but are not the full story. What changed in the last decade remains an open question that future research should address. Until then, policy makers may find it difficult to get Russian entrepreneurs off the endangered species list.