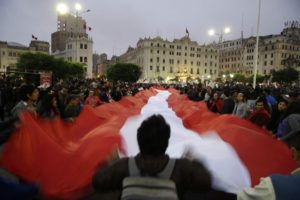 By Jeanne Cook, a Program Officer with CIPE’s Anti-Corruption and Governance Center

In July 2018, Peruvian citizens marched in the streets of Lima to protest Peru’s latest judicial corruption scandal. Only six months before, former President Pedro Pablo Kuczynski resigned amid allegations that he accepted bribes from Brazilian Construction firm Odebrecht. Faced with the frustration of Peruvian people fed up with the corruption plaguing the government, the current Peruvian President Martín Vizcarra created a new cabinet position, appointing Ms. Susana Silva Hasembank as the Secretary of Public Integrity.

Ms. Silva’s prior experiences make her a strong candidate for the position. She is the former General Coordinator for the High-Level Commission on Anti-Corruption (CAN). Ms. Silva represented Peru in the OECD Anti-bribery working group, and before in the OAS. She worked in various capacities in government, university, and NGO sectors, and she holds an LLM from Warwick University in England as well as a law degree from the Pontificate Catholic University of Peru.

The Secretariat of Integrity, like CAN before it, is charged with coordinating and implementing Peru’s National Integrity Plan and Fight Against Corruption 2018-2021 (Supreme Decree No 044-2018-PCM). The plan provides a detailed blueprint for working through issues and problems contributing to systemic corruption in Peru. Whether the office has the necessary clout or resources to facilitate the significant changes needed in Peru, remains to be seen.

In an August 22 conversation with CIPE, the newly installed Secretary, Silva stated that she believed that electoral law modification was essential to reforming the entire system: if the political finance situation is improved, other reforms will follow.

As part of his anti-corruption reform policy, President Vizcarra has proposed four constitutional reforms that would radically transform legislative power. They include: 1) Creation of a new system for selecting judges and prosecutors; 2) ending immediate re-election of lawmakers 3) Creation of a Bi-cameral legislature 3) Requiring disclosure of campaign contributions and criminalizing unreported contributions.

Despite 79% citizen support for the President’s policies according to an Ipsos poll, the opposition-led congress has not been cooperative. To avoid a no-confidence vote leading to its eventual dissolution, the Congress has agreed to have the proposals in some form voted on as a referendum by the Peruvian people in December. The congress, with its majority opposition Fujimorista party has until October 4th to construct the agenda for the referendum.

The attempt to implement broad anti-corruption reforms has spun into a potential constitutional crisis as political actors and firmly entrenched interests play out their hands. The public is fed up with the corruption that they have experienced at all levels of government presenting an unprecedented political moment and a pivotal point in Peruvian democracy.