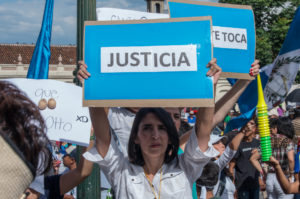 By Frank Brown, the Director of CIPE’s Anti-Corruption and Governance Center

Heads of state, especially from small countries, often wait all year for a chance to take the world stage at the annual September United Nations General Assembly. Presidents, prime ministers, and supreme leaders speak on issues ranging from global climate change to conflict and poverty. This year, Guatemala’s president Jimmy Morales chose to use half of his allotted time in the spotlight to address just one topic: an anti-corruption agency called the International Commission Against Impunity in Guatemala (CICIG). In a broad attack on the agency, Morales accused the UN sponsored CICIG of violating human rights, causing fatalities, and abusing its mandate. He concluded that CICIG had “become a threat to peace in Guatemala.”

President Morales’ statement focused the world’s attention on an issue that has consumed the global anti-corruption community since August, when Morales moved to ban CICIG’s commissioner from returning to the country, and then moved to shut down CICIG completely. CICIG is an unprecedented, 11-year-old experiment under which a sovereign state delegated to the United Nations the power to investigate and help the Guatemalan Attorney General’s Office prosecute certain kinds of crimes. Since its founding, CICIG’s operation has been watched closely as a possible model for other countries where the police and judiciary are so compromised by systemic corruption that they cannot be counted upon to act for the public good. To date, nothing like CICIG exists in the world.

On one level, CICIG has a strong track record. It has achieved 310 convictions, including two former presidents currently serving prison terms. Morales himself is under investigation for campaign finance violations. If Morales succeeds in breaking up CICIG and giving its functions to ordinary law enforcement and judicial entities, some experts predict dire consequences and a reversal of much progress that has been made in the Guatemalan justice sector to date.

“If CICIG’s mandate is finished, the state will be in the hands of organized crime, narco traffickers, and groups that depend on corruption and special treatment for their prosperity. Guatemala will become a failed state or a mafia state,” says Claudia Escobar, a former judge on Guatemala’s Court of Appeals. Escobar relocated to the U.S. in 2014 after being the lead whistleblower in a case of grand corruption that revealed illegal interference in Guatemala’s judiciary by high-ranking political officials including the country’s vice-president and the former president of congress. Escobar, now a Centennial Fellow at Georgetown University continues, “The Judicial Institutions will be so ineffective that people will have to leave, because impunity will be the rule and violence will increase. Also judges and prosecutors that are on the front lines in the corruption fight will be in danger. They are already being threatened.”

But Donald J. Planty, a former US Ambassador who helped secure the support of Guatemalan leaders for CICG’s role, has words of caution: “CICIG was never meant to have a permanent presence in Guatemala but was charged with helping Guatemala reform its rule of law institutions so that they could function properly within the country’s democratic framework. This critical part of CICIG’s mandate has gone unmet,” says Donald J. Planty.

By many accounts, CICIG’s fate is in the hands of international donors and the member states of development banks, which play a significant role in the country’s economy. The agency’s mandate expires in the coming year. A renewal requires a request by the Guatemalan government to the United Nations. For anti-corruption practitioners globally, how CICIG’s mandate is ended, extended or modified is of keen interest. CICIG represents an experiment in how to battle corruption in conditions of “state capture,” where government institutions are taken over by a small group of private, often criminal, interests.

If Morales succeeds in putting CICIG out of existence, as his speech to the UN would indicate, it will be a powerful lesson for future international efforts. There is no shortage of countries showing symptoms of state capture. Some, like Honduras, are trying somewhat watered-down versions of CICIG. Others, especially those fragile and failed states whose corruption threatens the security and stability of their neighbors and whole regions, will be candidates for CICIG-like solutions that seek to create internationally managed islands of justice and accountability inside sovereign states.

The real test to institutions similar to CICIG is whether they leave behind better, more robust local justice sector institutions that can continue the work once the international community leaves. In the case of Guatemala, the jury is still out if CICIG has been able to transfer and truly help transition Guatemala’s justice sector.

Despite the bleak headlines, CIPE has seen some positive developments in the justice sector in Guatemala. CIPE worked with the National Center for Economic Research (CIEN), a Guatemala based think tanks with ties to the private sector, to lead the Coalition for Citizen Safety. The Coalition has prepare reports about Guatemala’s international rankings in security and justice including an Index of Progress in Security of Guatemala (IDD). This index is presented on a monthly basis to track changes in key security indicators. While much work needs to be done, Guatemala has improved substantially in a decade, cutting homicide rate by almost half.