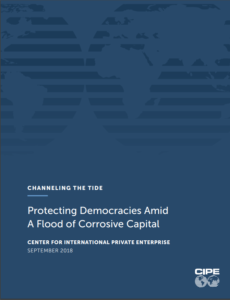 By Liad Roytfarb, a fellow with CIPE’s Anti-Corruption and Governance Center

Despite the focus on developing and emerging countries, more established countries are not immune to corruption, democracy backsliding, and the harmful effects of corrosive capital. The example of Israel shows this clearly. Israel does not come to mind when discussing corruption and poor governance. In fact, in 2017 it did extremely well in three major indexes: Corruption Perception Index (“CPI”) (Ranked 32/180), World Bank ‘Control of Corruption’ (Scored 80/100), and ‘Regulatory Quality’ (Scored 87/100). These rosy numbers, however, conceal the tendency of indexes to overlook changing landscape, to disregard public discourse, and even to present a picture that contradicts reality. This phenomenon is especially common in mature welfare states, as demonstrated in Erlingsson and Kristinsson’s study, showing the outrage in Iceland over very high corruption, in public perception, notwithstanding favorable CPI rates.

In Israel, as in Iceland, there is ample evidence of rampant political corruption and cronyism, of which the public is well aware. In the past decade Israel had a prime minister and three highly ranked ministers serving lengthy jail sentences for corruption. Moreover, the Minister of the Interior appointed in 2016, had also held the position in the nineties, and at the time was convicted of bribery, fraud, and breach of trust in his role as minister. In 2011 Israel encountered its largest social uprising as over a million demonstrators (approximately 1/8 of the total population) took to the streets of Tel Aviv, every Saturday for a full month. ‘Corruption’ was probably the most frequent word in these protests together with the Hebrew term “Hon-Shilton” (capital and ruling power). Fast forward to 2018: the Prime Minister’s office is under four different investigations.

The term ‘corrosive capital’ entails the detrimental effects of incoming capital from undemocratic regimes and non-transparent sources. A most salient concern for relatively strong economies is that acceptance of such funds may entail adoption of non-democratic rules of the game, which in turn may lessen adherence to ethical norms and transparent codes of business. This, in turn, weakens what Alina Mungui Pippidi, a leading anti-corruption scholar, refers to this as the “normative constraints on corruption.” In the case of Israel (and many other countries that come to mind), normative constraints are already low, and democratic institutions are constantly being undermined by politicians (See NY times article on this), putting the ‘only democracy in the Middle East’ at great danger.

Corrosive capital comes in different forms. In the Israeli context the most pressing issue probably concerns China, a heavy investor in Israel since the 1990s. A recent peak is the 2.5 billion USD purchase of Tnuva, the largest Israeli food manufacturer, by Chinese conglomerate Bright Foods in 2014. Furthermore, this coming week Wang Qishan, Vice President of China, is visiting Israel and will meet with Israeli Prime Minister Benjamin Netanyahu. The two will co-host the fourth meeting of the Israel-China Joint Committee on Innovation Cooperation (JCIC), a committee which ranks trade relations top priority. As Eustance Huang of CNBC notes Chinese investments in Israel’s high tech sector and disruptive technology are on the rise, augmented by the lack of a sizable Israeli domestic market, forcing Israel to constantly look abroad to sell technology and create partnerships.

Chinese capital flows, while not linked to current governance gaps, pose a risk for transparency and good governance in Israel. It will be wise to pay close attention to investment trends, for their obvious potential to undermine normative constraints on corruption. Breaking economic ties or limiting trade relations with China does not make economic sense, and so a sensible question is, what can be done to protect liberal norms from the potentially harmful effects of corrosive capital?

Several preliminary steps strike me as crucial. First, governments and civil society organizations should identify and assess potential risk factors on a case-by-case basis. Second, governments and companies must avoid a principal-agent relationship between foreign investors and different sectors in their respective countries. Third, business associations should undertake a more active role in setting norms of ethical business and ideals. Finally, rather than reacting to existing flows of capital, societies that are prone to corrosive capital should preemptively debate the costs and benefits of potential capital flows. Proper safeguarding measures should be debated, including strengthening corporate governance regulations and demanding higher standards of transparency from SME’s, especially those engaging in international business.