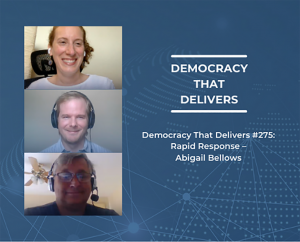 Abigail Bellows, Non-Resident Scholar with the Carnegie Endowment for International Peace, joined CIPE Communications Director Ken Jaques and Program Officer Peter Glover in August 2021 to discuss the political character of corruption fighting, including how corruption has undermined support for democracy around the globe. She describes how fast-moving anti-corruption programs can seize windows of opportunity and make big strides against corrupt systems.

Bellows, a thought leader on Twitter and in print, writes about topics like bridging the elite-grassroots divide in anti-corruption programs, an anti-corruption agenda for the middle class, and building momentum in the U.S. fight against corruption. Check out highlights from the podcast below and listen to the full episode here.

Ken Jaques: Peter mentioned you were an early mover of the idea of windows of opportunity for anti-corruption reform. What do you mean by that?

Abigail Bellows: This is the notion that the march of anti-corruption progress is not a linear one. It’s not incremental, and we don’t make a little step forward in a predictable way every year. It really is a cyclical one that comes in waves. And what we see is that there are these windows of opportunity that open perhaps in the wake of a corruption scandal, or even a COVID corruption revelation as we’re seeing in lots of different countries, and citizens start challenging the status quo––they try to renegotiate that social contract. And in some cases, there’s political transitions or a new administration that comes in promising to clean up house to fight corruption.

And during those moments, which tend to be brief––usually a year, a year and a half or less––that’s when we have the best opportunity to make a big step forward in the fight against corruption, knowing that there might be some steps back when there’s inevitably backlash against those reformist elements. So the goal is to run as far as we can down the track during those brief moments, and doing so can require the support of the whole international community. When there are new reformers elected, as we saw recently in Moldova with Maia Sandu’s election, where there’s really promising momentum, the international community needs to wrap around those reforms, both in government and also outside of government, because an investment in civil society, investigative journalists, and independent media during that brief window can help prolong it.

It can help increase the odds that the reformers will be successful because it tamps down the efforts by oligarchs and by entrenched interests to try to malign and marginalize and neutralize reformers where otherwise they might be able to. So during those brief moments, if the international community, the US and others, are able to give a big bear hug to those reformers and their allies outside government, then it can help make generational reform and really move the ball down the field.

Ken Jaques: [Rapid Response] is something that you were involved with early on, especially with the CROOK Act. Can you talk a little bit about that?

Abigal Bellows: Absolutely. And yes, it’s still precarious. It’s still in this incredibly pivotal moment where governance norms are being renegotiated in real time, [such as] in 2018 in Malaysia where tragically we’ve seen the loss of momentum just a couple of weeks ago when one of the officials implicated in the 1MDB [corruption] scandal was let off the hook.

And one of the challenges that I saw, even in 2015 and 2016, when I was working at the State Department, is that even when the US government wants to be able to surge support––it wants to be able to do that wraparound approach––as I mentioned to reformers and those outside of government, often they’re hamstrung: our diplomats and our aid providers have very few flexible resources to be able to pivot from, say, a country-designated account to something that could shift [between] countries based on where there’s new political momentum and also their ability to get the money out the door quickly––not two years from now when the window has closed. There are exceptions when the forces can be marshaled in a big way. In Ukraine, actually, there was a fair amount of effort done after the Maidan to try to marshal those resources. But those are really the exceptions, not the rules. It requires real bureaucratic gymnastics to succeed in that.

And so what we saw was the need for a new, flexible, rapid response mechanism to enable the US to respond to those historic windows of opportunity. The good news is that Congress took up that fight with the US Helsinki commission––I worked with Paul [Massaro] and others there––to try to develop the notion of an anti-corruption action fund […] now enshrined in this CROOK Act, which is [a] bi-partisan budget neutral [way] to surge support to priority countries who are committed to reform.

And our sense is that that would be something good for the foreign citizens who want a better life and want reform, but also good for US businesses because this new action fund wouldn’t be funded from normal appropriations the way that usual US assistance is. It would actually be funded by the violators of the Foreign Corrupt Practices Act. It would take a bit of a surcharge on the penalties and fines that some of the biggest violators of the FCPA are already paying and use that to essentially prevent future corruption.

Ken Jaques: As everybody knows, democracy is built on a strong middle class. So tell us about the adverse effects that we really don’t think about of corruption on the middle class.

Abigail Bellows: We are seeing around the world the grievances that everyday people have about corruption and how they’re boiling to the surface more than ever. The year before the pandemic, there were more protests globally than ever before. Many of them were based around corruption. And those are real and legitimate grievances that people have.

Often the opportunist authoritarian populists in particular tap into those grievances and present frustrated people with a false choice between democracy and anti-corruption progress. People like Bolsonaro and Duterte convince people that if they want a crackdown on corruption––if they want law and order––they have to give up on freedom and choice. And we know that that’s not the case [and] that anti-corruption can and actually must go hand in hand with democracy. They’re both about reigning in abuses of power.

But if we don’t deal with those sort of bottom-up grievances that the middle-class has, that working people have, then it will open the door to more and more of these authoritarian populists who are just trying to do nominal anti-corruption but in fact are focused on self enrichment. And so in the context of the US, one way that that can be applied is to try to make sure that the international anti-corruption agenda that the US is pursuing through the state department and treasury can more directly deliver for working Americans for our own domestic middle-class.

And I highlight in [my] article some of the ways in which that could be oriented: one is through a focus on real estate money laundering, because often real estate is a sweet spot for a kleptocrat who is wanting to stash their funds in a safe place that nobody can touch in the US and it has this terrible effects on US cities, where it’s making housing less and less affordable for the Americans who live here. And so increasing due diligence requirements for realtors and others in that sector could really help Americans make sure that they can afford to live in the places where they are currently living.

Also a focus on foreign bribery, meaning the bribery of foreign officials when a business from a third country is going over to explore a new prospect. Right now, the US is ahead of other countries in implementing its ban on foreign bribery, the Foreign Corrupt Practices Act. And so we could really elevate that in our diplomatic relationships because the countries that are lagging behind are our allies, they’re not the competitors that we usually refer to: it’s Germany, it’s France, it’s Canada, it’s countries that we do have a fair amount of engagement and potentially influence over. And so I will push to try to get them to step up their enforcement. Their bans on foreign bribery could help make the world more accessible and competitive to US businesses, to small businesses, to American companies that are employing a lot of American workers.

All of that can make globalization good for Americans and not just something where Americans are feeling the brunt of globalization as so often we are hearing now, and that’s one of the grievances that is animating that isolationism thread that we saw in the last election.

One other thing I’ll highlight is the importance of health governance, meaning the governance of foreign health systems we saw during the pandemic that when corruption has taken root in the health system of another country, it means that they’re slower to detect and respond to the kind of pandemic that has gripped the whole world, but it’s not just the whole world that’s been equally affected, of course. Working people and people of color are much more affected disproportionately by these pandemics. They have less economic resilience. They tend to be working in some of the frontline jobs that are more vulnerable to exposure.

And so one way that America can help, can use its foreign policy to help protect working Americans is to make sure that when we are going overseas and investing in global health security, we’re not just doing the downstream work on treating specific illnesses that are already manifesting. We’re also doing some of the behind the scenes, less sexy, but super important work of helping with procurement reform and personnel systems and hiring and logistics: all the things that mean that when we send aid abroad, the money can go missing often, or even their own systems. Their own budget expenses might be diverted if they don’t have the governance of their health system. And so that’s another way that the US can help prevent the next pandemic and support working Americans at the same time.