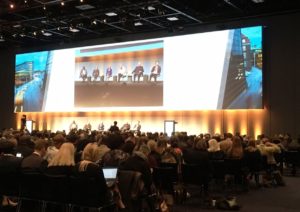 By Carmen Stanila, a Senior Consultant for CIPE based in Bucharest

It is the largest, most diverse gathering of anti-corruption advocates, experts, funders, and practitioners in the world. The latest edition of the International Anti-Corruption Conference (IACC) gathered over 1,800 people from 144 countries in Copenhagen. Three days of uplifting plenary sessions, results-oriented breakout sessions, and countless peer-to-peer exchanges made for an intense atmosphere at the dynamic October event attended by this writer and two CIPE staffers.

The 18th IACC’s declaration captured the priorities of a group that ranged from top government officials from wealthy nations to anti-corruption activists from some of the most corrupt, dangerous places in the world. Entitled “Stand Together for Peace, Security and Development,” the declaration calls for protecting civil liberties and civil society, combatting money laundering and illegal financial flows, boosting private sector transparency, and empowering those who expose corruption.

One of the IACC’s central themes was that corruption can drive conflict by galvanizing popular dissatisfaction among citizens who are deprived of basic services. Then, in the period following a conflict, weak or strained institutions struggle to contain corruption. IACC presenters highlighted the idea of developing a reconstruction agenda that will hold stakeholders accountable, in conjunction with building the rule of law and local governance institutions.

Given the technological leaps that have occurred since the last IACC was held in 2016 in Panama City, tech-based solutions to corruption challenges figured prominently. “Technology is neither good nor bad. It’s just a tool – a very powerful tool,” said Ulla Tørnæs, Danish Minister for Development Cooperation, while speaking on the “Code to Integrity: Digital Avenues to Anti-Corruption” panel. While apps, data, recordings, biometrics, and online platforms can help document and expose instances of corrupt practices, they are not sufficient in isolation. In order to effectively use technology to help fight corruption and increase transparency, developers, civil society, governments, and the media must learn to cooperate with one another, participants concluded.

Whether intentional or not, the choice of Denmark as a venue for the 18th IACC turned out to be significant. According to the “Nordic Myth,” the consistently high rank of Nordic countries on Transparency International’s Corruption Perceptions Index means that citizens of Scandinavian countries consider themselves to be living in some of the world’s least corrupt countries. As one IACC presenter said, the Nordic Myth needs to be killed because it is untrue. Nordic countries are not free of corruption, and so using Nordic countries as a model for other efforts to combat corruption can prove problematic. Further, the Nordic model of doing business depends on high levels of social trust and cannot be exported to environments with less social trust. There are many elements of Nordic organizational culture, such as processes, policies, routines, that can be applied in other countries, but the model is not perfect, as illustrated by the recent case of Danske Bank Estonia, often referred to during the conference in the context of private sector corruption.

In general, based on CIPE experience, the business community can help fight corruption by strengthening internal processes and compliance, such as implementing due diligence guidelines, whistleblower policies, compliance mechanisms, and risk assessments. A number of tools are already freely available, such as the OECD Due Diligence Guidance for Responsible Business Conduct published in early 2018, as well as CIPE’s Anti-Corruption Compliance: A Guide for Mid-Sized Companies in Emerging Markets. Similarly, CIPE and the International Chamber of Commerce World Chamber Federation (ICC WCF) are developing anti-corruption principles for business associations and chambers of commerce, which will provide guidance on good governance, business ethics, and anti-corruption compliance. CIPE-supported private sector collective action initiatives have proven to be effective tools in fighting corruption in emerging markets with weak rule of law. The most notable example is Thailand’s Collective Action Against Corruption, which includes over 900 companies and it works closely with some Thai government agencies.

Thai-style collaboration between the private and public sectors has strong potential as an approach to combat corruption, many IACC participants concluded. For example, the Fight Against Facilitation Payments Initiative  (FAFPI) collects data from Danish companies that encounter demands for facilitation payments when conducting business internationally. FAFPI takes that data and then works with the Danish Ministry of Foreign Affairs to map risks. This helps the government target locations where bribery risks are greatest. Such tools identify moving targets, as corruption risk is constantly shifting, something that will doubtless become obvious when the IACC reconvenes in 2020 in Seoul.