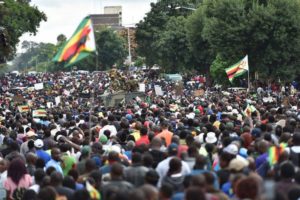 Zimbabwe’s stunning overthrow of former President Robert Mugabe shocked the world – mostly because the people of Zimbabwe had just cause to oust him for decades. As president of Zimbabwe, Mugabe was so publicly corrupt that he led to the coining of the term “kleptocrat.” Since his overthrow, the new President Emmerson Mnangagwa has made combating corruption one of the priority focuses of his presidency. During his first State of the Nation address in December 2017 Mnangagwa said: “On individual cases of corruption, every case must be investigated and punished in accordance with the dictates of our laws. There should be no sacred cows. My government will have zero tolerance towards corruption and this has already begun.” Zimbabwe’s neighbors can attest to the fact that implementing and enforcing ambitious anti-corruption reforms are nonetheless quite challenging.

For a country with rampant corruption embedded across most business and industrial sectors, it is not surprising that Zimbabwe ranks 157th (out of 180) in Transparency International’s (TI) 2017 Corruption Perception Index, and 159th out of 190 in the World Bank’s Ease of Doing Business Report, but that does not tell the full story. In 2016, the Center for International Private Enterprise (CIPE) published the Zimbabwe Corruption in Business Survey, a report which exposed the extent of red tape, roadblocks, and rent-seeking that stood between businesses and growth. The results of CIPE’s report highlight many of the reasons why Zimbabwe scores so poorly.

The CIPE survey uncovered numerous practices and procedures in the business registration process that worsened the business climate in Zimbabwe and expanded the possibility for rent-seeking, bribery, and extortion. Those starting a business consistently complained about demands for bribes, poor business registration processes, and opacity around making any changes to their enterprise or paying taxes. These conditions are stifling the development of a prosperous and inclusive private sector. The lack of clarity and extractive nature of the public sector discourages and diminishes foreign investment, adds to economic uncertainty, and reduces government revenues as businesses are incentivized to remain informal.

Zimbabwe is by no means unique in this regard. Within highly corrupt states, we often see institutionalized tactics designed to facilitate public theft with little to no accountability. Civil servants and public sector employees are purposely underpaid. Bribes are viewed as a way to subsidize salaries, moreover, the extent of financial gain from illicit activity can even lead to individuals bribing hiring managers to get seemingly low paying jobs.

So how can this be combated? Creating a transparent and unambiguous system, which removes discretion from government employees, automates high risk processes, and provides a safe space for reporting violations is a great first step. Simultaneously, Zimbabweans must demand more of their government and hold politicians accountable through democratic elections.

Eric Brownstein is a CIPE Consultant for the Africa Department