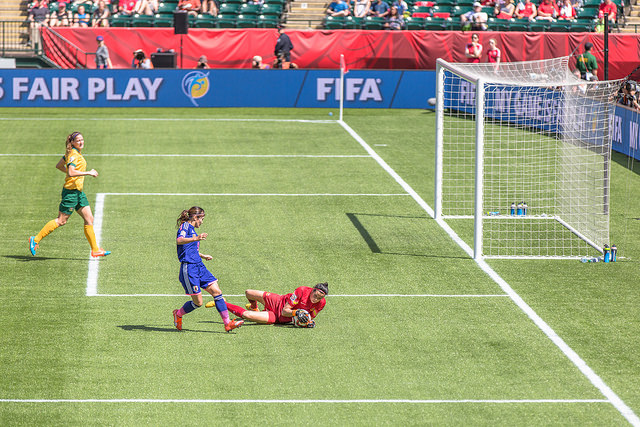 This June, women from the world’s top 24 national soccer teams will play in nine cities across France in the most acclaimed tournament of their lives. The Women’s World Cup, like the men’s, is organized and run by the Fédération Internationale de Football Association (FIFA). FIFA has long been embroiled in corruption schemes, the most recent of which was in May 2015 when 14 high-level officials were indicted on charges having to do with soliciting over $150 million in bribes over a 24-year period. The same conditions that allowed FIFA officials to invite such lavish gift-giving and under-the-table bribes are the same conditions that continue to allow FIFA to display inequitable treatment of men’s and women’s teams.

FIFA has a history of maintaining different standards for the Men’s and Women’s World Cups. In the 2015 Women’s World Cup, the 24 teams split a mere $15 million in prize money[1], stayed in the same hotels as opponents[2], and played on less desirable and less safe artificial turf fields[3]  – none of which would have happened in the men’s tournament. Currently, the likelihood is slim of the Women’s World Cup being staged under conditions remotely equal to the men’s  despite FIFA undergoing some of the most sweeping changes in its history.

In a series of reforms following the recent corruption scandals, FIFA moved to comply with international anti-corruption standards by reshuffling its governance structure in 2016, replacing its 24-seat Executive Committee with a larger 36-seat FIFA Council, reducing the president’s powers, setting term limits, publicly disclosing salaries, and adding an independent audit and compliance committee responsible for overseeing the Council.

Yet such changes only address the symptoms of corruption, not the cause. Corruption is the misuse of power for personal gain. Inviting bribes for media contracts and host city bids for past Men’s World Cups was an egregious misuse of power on the part of FIFA officials. FIFA’s status as a nonprofit and a monopoly means there is little market oversight and few compliance regulations in place when organizing the Men’s and Women’s World Cups.

Robert Klitgaard, a prominent author in anti-corruption literature, introduced an equation to frame the discussion of corruption:

M = Monopoly: How does FIFA act like a monopoly? FIFA is the sole organizer of the biggest soccer tournament in the world. No other entity has the capability to choose a host city through a competitive bidding process, negotiate media contracts, and carry out logistics for stadiums, hotels, and transportation. This makes FIFA an indispensable service provider. Turning to a competitor isn’t an option. Players and fans can protest or threaten to boycott, but short of athletes not participating (and you would be hard-pressed to find a soccer player who would do that), what would compel FIFA to change its behavior? FIFA oversees six confederations, 211 member associations, and countless athletes that are at FIFA’s mercy when and if FIFA approves the use of turf fields, unequal prize money, or odd hotel bookings.

D = Discretion: What level of discretion do FIFAs officials employ? The FIFA Council is the decision-making arm that holds the reins of power to approve logistics and prize money. As a result of the 2016 restructuring, the number of female representatives on the Council grew from one (elected for the first time in 2013) to six, a mandated one female representative per confederation, out of 36 total seats. Most of the voting power that decides how to allocate resources between the tournaments remains concentrated in male hands.

A = Accountability: FIFA is a registered nonprofit with remarkable autonomy. FIFA’s own internal compliance committee is responsible for overseeing the ethics of the Council’s actions. The Council recently approved the doubling of prize money for the 2019 Women’s World cup to $30 million, but it will still only be one-thirteenth of the men’s 2018 pot of $400 million. Could the teams, the players, or the fans hold FIFA accountable to implementing equitable practices? Unlikely, as there is hardly a shortage of players who would jump at the chance to be called up to their national team. And any fan-based mobilization for a boycott or otherwise, while it could be effective, would be nearly impossible to organize as over three billion people watched the 2018 Men’s World Cup and 750 million watched the 2015 Women’s World Cup.

In defense of the lower cash prize for women’s teams, FIFA President Gianni Infantino argued that prize money for a tournament reflects the amount that tournament generates for FIFA. He said, “maybe one day women’s football will generate more than men’s football.” He’s right, of course. Women’s soccer generates less money than men’s soccer. FIFA might impose the costs of hosting the World Cup on the host country, but it still receives billions of dollars in television and broadcasting contracts, as well as sponsorships. All those revenue streams are generally higher in men’s soccer. That said, with all its money and power, FIFA actually has the power to address the structural imbalances of viewership[4].

Low viewership stems from the general lack of exposure the world has to women’s soccer. The more often women’s soccer is shown on a prestigious world stage, the more likely the sport will rise in popularity and gain widespread societal acceptance. As more value is placed on women in sports, the number of women’s teams and leagues will grow, reaching young women and girls in faraway corners.

A monopoly with large discretionary powers and little accountability to act responsibly, FIFA has little incentive to change its behavior pattern. Klitgaard would likely say it is up to journalists, fans, law enforcement agencies, and players to keep FIFA’s actions in the spotlight and apply continued pressure on the organization to change.

Perhaps simply watching the Women’s World Cup this summer could be a place to start.

[1] In 2018, FIFA allocated $400 million in prize money to the 32 men’s teams that participated, given out to each team on a sliding scale depending on how well they placed. The men’s 2018 World Cup champion France took home $38 million, while the winning U.S. Women’s team split $2 million in 2015. In the 2022 Men’s World Cup, the total prize money will rise to $440 million to be divided amongst the teams.

[3] The women played on turf in 2015 while the men have never played on turf. Turf reaches hotter temperatures than grass and players argue it poses higher risk of injury.

[4] Women have not been playing soccer as long. The first Women’s World Cup was in 1991, while the men’s was in 1930. Societal pressures and gender expectations in different parts of the result in delayed and slow growth in women’s sports, especially soccer.