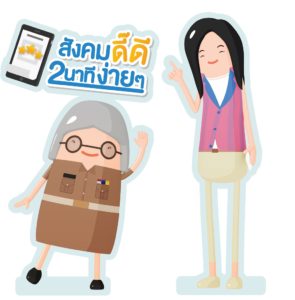 Bureaucratic red tape and arbitrary decision-making around public services are key conditions that nurture a culture of corruption. Complicated and unclear processes accommodate corrupt practices by creating uncertainties that justify both the demand and supply side of bribery. To effectively mitigate corruption risks, it is essential to improve citizen and private sector feedback to government in public service delivery.

In this regard, Thailand’s Collective Action Coalition against Corruption (CAC) with support from CIPE, developed a platform called “Citizen Feedback” that successfully ran a pilot in autumn of 2017. This platform allows the public to share their opinions on their experience interacting with government service providers, which will ideally lead to a ranking of public offices, similar to TripAdvisor, thus fostering positive competition among agencies.

Anyone can conveniently participate in the Citizen Feedback program by scanning a quick response or ‘QR’ Code located at the agencies they visited. The QR will link them to a brief online survey that can be completed in two minutes. Besides a service rating of their experience, respondents can also indicate obstacles and even bribery attempts during their visit. Citizens can provide their input freely as their identity will not be revealed.

The compiled data will then be analyzed by private experts and presented statistically to compare the levels of satisfaction and transparency of each government agency. The results can be used to understand the root-causes of service issues and identify ways to solve these long-term problems. This information can also help the government design incentives for state agencies to improve their efficiency, transparency, and service quality.

The original pilot ran from September to October 2017 at five sites including three offices of the Department of Land, the Department of Land Transport’s registration unit, and Food and Drug Administration’s license application center. The test run attracted 2,350 respondents which is a substantially higher participation rate compared to existing government surveys and complaint channels. In locations where a typical suggestion box was also used, the project received 90 times more completed questionnaires from citizens within the same period.

Given the impressive success of the private sector’s pilot project, early this year Thailand’s government expressed interest in adopting a similar concept, allotting a substantial budget to develop its own version of Citizen Feedback aiming for roll out at all state agencies nationwide in the coming years. This is an important example of how an initiative by the private sector can inspire the government to listen to its citizens and follow the business community’s lead to find new ways to improve efficiency and transparency.