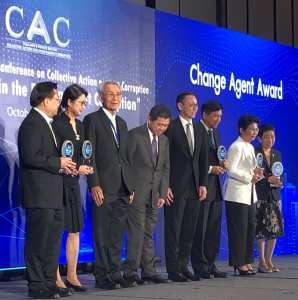 One of the premier anti-corruption events in Asia comes every October when Thailand’s Coalition Against Corruption holds its annual celebration of innovation and achievement. The scene at this year’s event, held at an upscale Bangkok hotel, was typical. Hundreds of men and women in dark suits waiting for their companies’ names to be called in recognition of successfully passing a grueling compliance audit. From the stage, testimonials from some of the nearly 1,000 corporate members of the CAC. A gentle reminder from the CAC leadership that the group’s mission is to reduce corruption in Thai society generally, not just in corporations. An inspiring talk from a celebrity from the global anti-corruption world.

“It is so important what you are doing. Not just one company working alone but many working together,” said Drago Kos, chairman of the Working Group on Bribery of the Paris-based Organisation for Economic Cooperation and Development. “This is what we need to do. You are an example for the world. You can be sure that I will mention the CAC in my speeches going forward. And I give many speeches every year.”

In the 10 years since CIPE staffers John Morrell and Aleksandr Shkolnikov teamed up with the Thai Institute of Directors to launch the CAC, much has changed. Back then, it wasn’t entirely clear if the innovative approach to leveraging individual companies’ anti-corruption compliance obligations into collective action would succeed. Now, the CAC is one of the two most successful corporate anti-corruption collective action programs in the world. (The other being the Copenhagen-based Maritime Anti-Corruption Network.) Within CIPE, the CAC model has gone on to serve as a proof of concept for similar efforts in Indonesia, Africa, and Eurasia.

Just as important, the CAC is an incubator for anti-corruption ideas, serving, if you will, as a research and development affiliate for CIPE’s Anti-Corruption & Governance Center. Much of the credit goes to the high calibre of the four-person CAC staff. They tend to have previously worked at multi-national corporations and consultancies – ranging from Shell to PwC, Cisco and Dow Jones. They have a mindset that anti-corruption work may not be funded on its merit alone, but that it must be marketed, promoted, packaged, and generally presented in a way that appeals to corporations’ self-interest and citizens’ desire to live in a fair, just world.

Often, the CAC unveils a newly innovated project in October. This year, the CAC recognized its first group of Change Agents, companies that are pioneering the CAC’s drive to engage not just large domestic and foreign corporations but also mid-sized Thai companies, firms that may lack the resources and incentives to put in place anti-corruption compliance programs. According to CAC leader Pana Ratanabanangkoon, the Change Agent program grew out of the fact that the CAC staff is already stretched thin, mainly with the constant process of auditing and certifying the nearly 400 member companies which have committed to upholding a rigorous, verifiable standard for anti-corruption compliance.

For the CAC to expand its member ranks with smaller companies that traditionally are more vulnerable to predatory, bribe-seeking bureaucrats, it was necessary to find another way to engage with what the CAC defines as small- and medium-sized enterprises (SMEs) – companies not listed on the stock exchange and with less than 1 billion baht ($33 million) in annual revenue.

“We simply cannot recruit the SMEs on a one-on-one basis,” Ratanabanangkoon said. “Therefore, we relied on the large companies to assist and become the ‘big brother’ to their suppliers, which has many benefits. Some large companies, help the SMEs by having a dedicated team to provide briefings and offer assistance during the SME Certification process. Some companies provide financial assistance for the SME certification fee. In the long run, we hope that large companies will help use their presence in the society to push back against any bribery demands that their suppliers may experience. This approach can help with our efforts exponentially.” 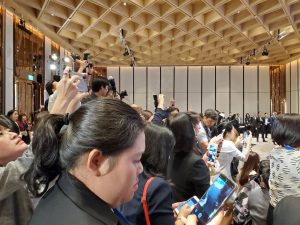 This year, five large companies were recognized as Change Agents. In order to win that status, each of the companies had to recruit 10 SMEs that had pledged to seek CAC’s anti-corruption compliance certification tailor-made for SMEs. CAC’s aim is to grow the program in future years, keeping in mind that “the ultimate goal is not to certify companies but to ‘change’ the corruption situation in Thailand.”

Globally, one of biggest challenges faced by companies seeking to comply with extra-territorial anti-corruption laws such as the United States Foreign Corruption Practices Act is the fact that they are responsible for their suppliers’ behavior. With that in mind, some CAC member companies are requiring key suppliers to attain CAC certification, thus reducing the corruption risk posed by suppliers.

Ratanabanangkoon said, “We will then work with these potential candidates to set up an on-site supplier briefing day, which will start with the CEO or Chairman of the Change Agent setting the tone about why it is important for SMEs to join. CAC will then walk them through the process. We tend to specify that owners of the SMEs must attend to later deliver a tone-from-the-top message.”

Come next October, as the Change Agent program expands, Ratanabanangkoon hopes to announce progress in identifying ways to attract more SME members. “We plan to seek benefits for the SMEs both from the almost 400 large companies in CAC and from government agencies, the latter of which have been extremely difficult to come by.” Ultimately, if the CAC can win preferential treatment for its members from government procurement agencies based on the members’ reduced corruption-risk profiles, that would be a huge accomplishment. Stay tuned for next October.