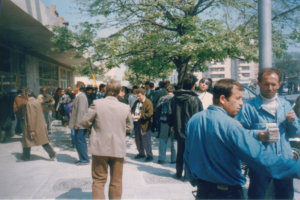 At their height in November 1996, a series of Albanian “Ponzi” schemes held money equal to almost half of the country’s total GDP. The schemes were fronted by a series of companies and charitable foundations that sprung up in newly capitalist Albania and offered monthly interest rates on deposits. Over half of the population rushed to invest in the schemes, some of which promised to triple an investor’s money in three months. The government itself ran advertisements for the schemes on state-run television. According to one observer, the country smelled and sounded like a slaughterhouse because of all the farmers selling off their livestock to invest in the schemes. It seemed as if everybody could get rich quick.

The collapse was predictably swift. On November 19th, 1996, the first scheme collapsed when it could no longer bring in enough deposits to pay previous depositors. Within four months, all the other major schemes had collapsed as well. Civil disorder, the collapse of the government, the looting of over one million weapons from state armories, 2,000 deaths, and an intervention by foreign armies all followed. For more information on the Ponzi schemes, look to this detailed yet digestible IMF paper analyzing their rise and fall, and Albania’s subsequent recovery.

A key lesson about corporate compliance from the extreme case of Albania is that strong corporate governance and ethics serve to mitigate risks that exceed the threat of any government sanctioned penalties.

In the case of Albania, the companies involved in the Ponzi scheme, most notably Vefa Holding, started out as genuine businesses that made real investments. After the fall of the Soviet Union, there was a desperate lack of governance and a very weak banking system. Vefa took deposits from people frustrated with the slow-moving banks and made investments in some legitimate businesses, along with some less legitimate lines of work. But from all indications, Vefa was not started with the intention of scamming people out of money. However, as other similar businesses opened, Vefa decided to compete with them in order to continue attracting depositors by raising interest rates. This decision set Vefa on a risky and unethical path to ultimately becoming a Ponzi scheme. Greater appreciation for corporate governance and business ethics generally, might have prevented this mistake or at least the scale of it.

This case also shows that investors (or in this case depositors) have a strong interest in robust corporate governance. The lack of government oversight meant that these Ponzi schemes faced no real risk of being sanctioned as they expanded into riskier territory. After the schemes collapsed, a new government formed and enacted major governance and regulatory reforms. One step Albania’s new government did not take was to promise to reimburse depositors who lost their savings. Governments rarely reimburse Ponzi scheme victims beyond the assets they are able to recover from the schemes directly. Investing in businesses without strong governance opens investors up to extreme financial risk.

Albania’s Ponzi schemes are still relevant now because similar schemes continue to pop up. For example, Sergei Mavrodi’s MMM Ponzi scheme, which ran rampant in Russia in the mid-90s, is now becoming increasingly popular throughout the global south, promising potential investors huge returns through bitcoin. In 2016, Mavrodi used a bitcoin Ponzi scheme to steal $50 million from three million Nigerians. Bitcoin is becoming a popular medium for Ponzi schemes because of public perception of Bitcoin as a complicated but extremely profitable investment. Similarly, schemers and scammers choose bitcoin because governments have not found a way to regulate cryptocurrencies or pursue cases of fraud and asset recovery as easily as they would in conventional financial systems.

These Ponzi schemes are extreme examples, but they make a strong case for the importance of corporate governance and ethics, especially as cryptocurrencies and other new technologies make the tracking of capital more complicated than ever.

Peter Glover is a Assistant Program Officer at CIPE