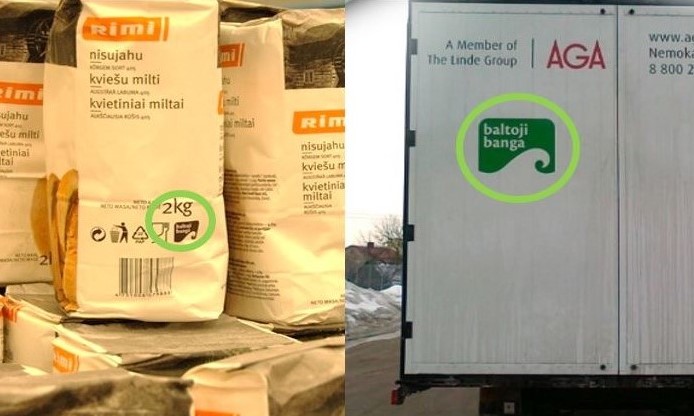 To the casual observer, a small wave-shaped logo printed on the products and packaging of local businesses should make no difference to buyer loyalty. Yet the story of Lithuania’s Clear Wave Initiative suggests that it does. In 2017, close to 40 percent of Lithuanians stated that they could recognize the “White Wave” logo.

The initiative emerged out of a 2006 scandal involving so-called “envelope wages.” The term refers to the widespread practice by Lithuanian retailers and other businesses to avoid paying taxes by not registering some of their employees or by declaring their wages improperly. In the public outcry that followed the scandal, several Lithuanian companies and civil society organizations created an initiative to publicize the private sector’s commitments to abide by national laws and pay taxes. Supported by the Investors’ Forum, the largest voluntary and independent business association in Lithuania, the Clear Wave Initiative was born.

In subsequent years, Clear Wave’s members expanded their commitment beyond basic compliance with the national tax and labor codes to prioritize ethics and integrity in all business decisions. Though it has not yet become the nationwide movement that its founders had envisioned, Clear Wave has successfully built a solid base of 60 member companies. These members come from a variety of sectors and include both small businesses and some of the largest companies in Lithuania. Furthermore, survey results continue to show that consumers prefer businesses that are local, law-abiding, transparent, and pay taxes—all characteristics of Clear Wave’s members. What accounts for Clear Wave’s success, and what can be done to bring even more committed businesses to the initiative?

This was a subject of a recent public discussion between the Center for International Private Enterprise (CIPE) and the head of the Clear Wave Initiative, Ieva Lapeikiene on July 16, 2020. In her presentation, Lapeikiene pointed to six main factors that, in her view, have contributed to the steady success of the Clear Wave collective action initiative over the past 13 years:

1. A clear, well-understood commitment that responded directly to the malpractice exposed in the highly publicized 2006 scandal: “no envelope wages”.

2. Strong support from ethics-supporting international companies in Lithuania and from the United National Development Program in Lithuania, Transparency International Lithuania, the Lithuanian Business Support Agency, and other civic initiatives.

3. Official support from the Investors’ Forum which has lent the initiative credibility, network opportunities and expertise from the very beginning.

5. Active communication and media campaigns to promote the initiative.

6. A level of awareness and support among Lithuanian business leaders and consumers who have been willing to embrace change and demand more ethical and transparent business practices.

Lapeikiene also highlighted several Clear Wave’s achievements. Through its membership, the initiative has promoted ethical and responsible businesses and raised societal expectations about ethical business conduct. It has acted together with other local civil service organizations (CSOs), including Transparency International in Lithuania, and received strong encouragement and support from the Lithuanian Government. Lapeikiene argued that these efforts could be observed through the declining reports of experiencing bribery in Lithuania since 2011, as indicated in the December 2019 survey of businesses initiated by the Special Investigation Service of the Republic of Lithuania. The same survey observes that, compared to previous years, more businesses have a negative view of corruption. An increasing number of firms do not agree that “bribes save time when handling the administrative procedures,” that “corruption ‘lubricates’ inefficient state mechanisms”, and that businessmen “have to pay bribes for civil servants because of low salaries”.

The Clear Wave initiative has experienced its share of challenges over the past 13 years. The biggest challenge has been attracting more members—with the next target being 100, and then 1,000, according to Lapeikiene. Another challenge, though uncommon, has been dealing with the member companies that have violated their Clear Wave membership agreement by engaging in unlawful or unethical conduct. “When trust is lost, a company can no longer be part of our initiative,” Lapeikiene told CIPE. However, those companies whose membership was terminated are given the opportunity to rectify their mistakes and re-apply for membership. Lapeikiene argued that public course-corrections and learning from mistakes has proven to be beneficial for both the companies and the Clear Wave initiative.

Over the years, CIPE has supported the private sector in establishing and developing business integrity collective action initiatives around the world, with the most prominent being Thailand’s Private Sector Collective Action Against Corruption, or Thai CAC. With over 1,000 member companies and almost 500 of them being certified by independent auditors for their anti-corruption commitments, Thai CAC has provided a platform for businesses of all sizes to participate in solving corruption problems collectively. Companies have been able to take part in formulating policies and developing anti-corruption mechanisms that can have direct impact on reducing the risk of bribery. Thai CAC hopes to create a critical mass of honest and transparent companies which will increase the demand for anti-corruption in the rest of the marketplace and society overall. CIPE also continues to support business integrity collective action initiatives in Armenia, Indonesia, Hungary, and recently partnered with the Ukrainian Network for Integrity and Compliance (UNIC), a first such initiative in Ukraine that brings together more than 60 leading Ukrainian companies.

CIPE’s focus on business integrity collective actions reflects a broader global trend. The Basel Institute on Governance leads the efforts by identifying, collecting and profiling such initiatives to allow the global exchange of ideas and learning opportunities. One of the most prominent examples of the global business anti-corruption collective action initiatives remains the Maritime Anti-Corruption Network (MACN). Since its establishment in 2011 by a small group of committed maritime companies, MACN now includes over 130 companies globally and continues to work towards the vision of a maritime industry free of corruption that enables fair trade to the benefit of society at large.

CIPE will continue its thought leadership in private sector collective action by supporting collective action organizations and by gathering area experts to share knowledge and give advice to other groups working together to fight corrupt and unethical conduct.